Darian has had two warts on his fingers for about a year now, we tried a different branded over the counter freeze treatment which failed to work, so we went to our doctor to ask for advice on what to do, he was prescribed a liquid treatment which again failed to have any effect on the warts.

Poor Darian didn’t seem too concerned himself but there was a moment when a friend of his asked what they were, and I felt sad for him, I know myself, having grown up with eczema covering my arms and legs, that it feels awful when other people notice and mention it.

Fuel PR got in touch with us to see if we would be interested in trying out the Excilor 2in1 5-day wart treatment, which combines a freeze treatment on day 1, followed by 4 days of gel treatment.

To be honest, after the previous failed treatment which was not cheap, I was skeptical but hopeful that this product might help Darian, so I agreed to give it a shot and share our experience with the product on my Instagram in return for the gifted product.

So when it arrived, I read all the instructions and began day 1 of the treatment, which is freezing the warts with the blue end of the device. You just insert a clean foam tip (included in the box) aline the ice symbols on the blue end with the black middle section and press down for 1 second to ‘charge’ it with the freeze treatment. Wait 20 seconds for it to reach optimal temperature and then hold it on the wart for 20 seconds – if there is more than one wart, you need to repeat this process with a new foam tip for each one.

Darian said this was quite sore whilst it was being done and for a while afterwards but he was so brave and coped with it really well, and within half an hour or so it was no longer hurting him. 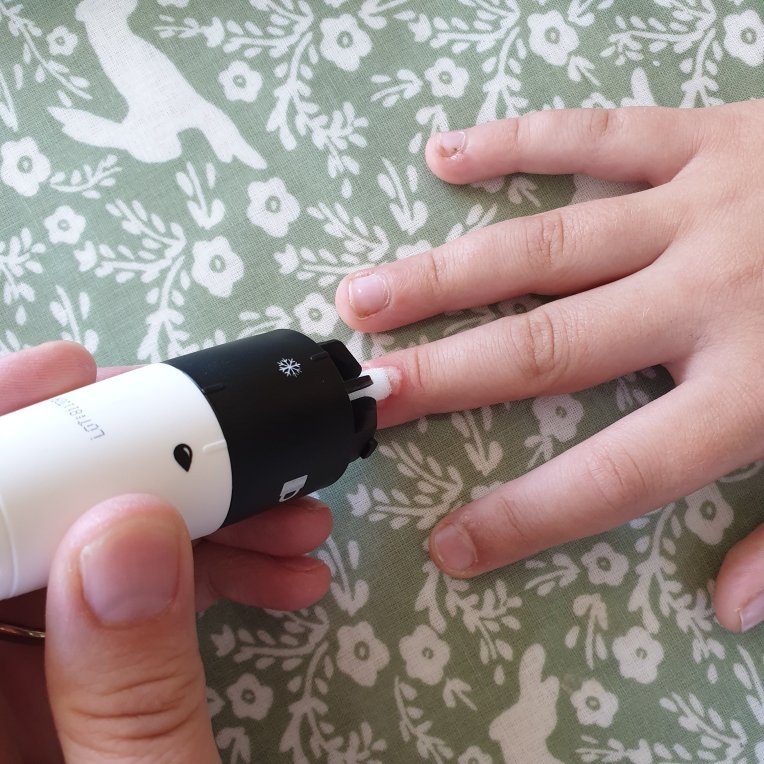 Days 2-5 were applying the gel from the white end of the device. This was really easy and works by turning the top of the device to hear a click and release 1 drop of the gel at a time, it is recommended that 1 drop be used on each wart, and add a further drop if the first one doesn’t completely cover the wart. We needed to use 2 drops on Darian’s largest wart and 1 drop on the smaller one.

The gel treatments were was completely painless for Darian and I liked the 1 click = 1 drop dosage which meant I couldn’t accidentally use to much or spill any, which can happen with the tube/bottled versions.

By day 4 of the treatment Darian’s warts had completely changed colour and a hardened layer had formed on top of the warts, which means that the treatment has worked!

We now just need to wait for Darian’s skin to recover from the treatment. New healthy skin has begun to cover the edges of the darkened, hardened layer which means it is healing and the wart will eventually get smaller and disappear or drop off – I know, too much information there!

I’m so pleased with the results of the Excilor 2in1 5-day wart and verruca treatment and would definitely recommend it if you or your little ones are suffering from warts or verrucas on your hands and feet.

Please always read the instructions carefully and ask for advice from your doctor or pharmacist if you are at all unsure if the product is right for you or your little one prior to starting treatment.

You can find out more about Excilor 2in1 aswell as skin tag and fungal nail treatments on their website.

We are now two weeks post treatment with Excilor 2in1 5-day wart treatment and Darian’s warts have completely disappeared and new healthy skin has now appeared!

I’m so, so pleased with this result and would definitely recommend Excilor 2in1 for warts and verrucas.